Translations: a chain of painting, poetry, mosaic, and assemblage

Each chain in Translations: chains of positive energy (c.o.p.e.) was started by someone offering a word/phrase/quote that describes a quality or mindset they have that allows them to move forward through these challenging times. The word was then sent to another artist to "translate" into their own modality. Once complete, that new artwork was sent to a different artist to translate into a different modality, and on and on, with each artist ONLY seeing the one translation immediately prior to their own. They artists did NOT see the reflections written by the previous artist, only the image of the work and the title. The reflections were revealed only when the chain was complete. The seven links in the completed chain are a nod to the seven days in each week that feel so long right now. Below is one complete chain - beginning with a word, and ending with a word, and translated through various art forms in between. Enjoy! 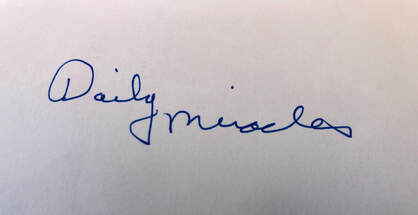 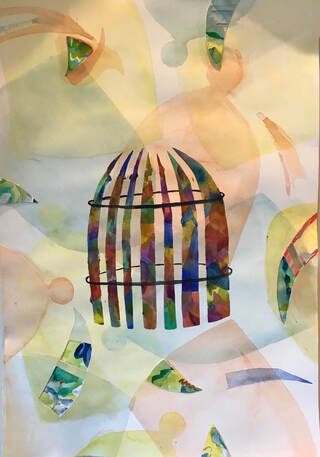 Link 2: Birdcage, watercolor and collage on paper, submitted by Anya Shire-Plumb
​Artist Reflection: Quarantine has made me feel like I am trapped in a birdcage, unable to fly. However, when I am able to see through the bars, and feel as though I am being productive, it helps me feel less trapped. The bars are made of colors overlapping because I also think there is more to see within the birdcage than I first might have thought. Spending time with my family and taking some time from the outside world has brought its own 'daily miracles'. 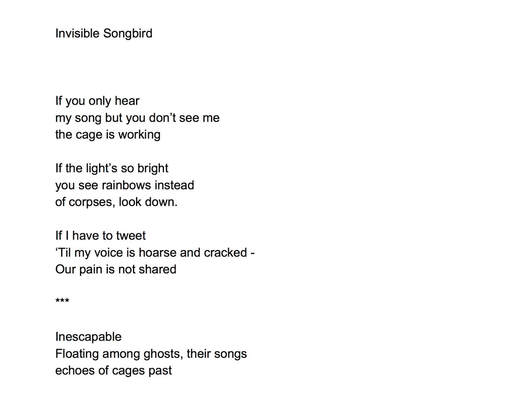 Link 3: Invisible Songbird, poem ​submitted by Craig Parker
​Artist Reflection: When I looked at the artwork it was easy to focus on the central image, but I was equally fascinated by the phantom images that seemed to be skewed reflections of the central one. The concept of a cage, in these times, easily resonated with me. As much as my piece was a reflection of that artwork, I'd find it hard to NOT relate current events to anything put in front of me. I hope that is not a disservice to the art itself, but rather a statement as to how art, artist, and art consumer are connected through our shared - and not shared - experiences. 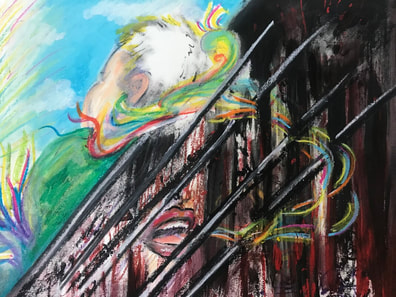 Link 4: Lying on the incarcerated, looking up, mixed media submitted by Bed Hermin
Artist Reflection: Invisible Songbird was profoundly moving and heart opening to the injustice and invisibility of a caged singer’s plight. My response doesn’t even begin to do justice to the poem’s soul, though it inspired to me to articulate a discordant vision, and a face turned away from darkness and pain. I also had no idea how difficult it would be and how deeply moved and just... wow... this is real.
Translations · 5- Amazing Graced
Link 5: Amazing Graced, cello and electronic media submitted by Jeremy Dalnes
Artist Reflection: Using a technique called algorithmic composition, I tried to map the visual story, contour, and coloring of the painting I received to music. The piece was both dark and light with a hopeful message at the end. The hope in this piece is that, like a lotus flower that only grows out of the muck, we too will emerge from this time with more grace, humility, and love for one another.

Link 6: Within the Veil, mixed media artwork including crayon, pen, negative image of 1919 photo, and Windows PC Paint, submitted by Benjy Kantor
​Artist Reflection: The previous work, an instrumental version of "Amazing Grace," was set against a backdrop of static that reminded me of waves in the middle of the ocean, far removed from land, which seems fitting since the lyrics for Amazing Grace were written by John Newton, who both captained slave ships and was for a time actually held as a slave, prior to his "come to god" moment leading to abolitionist views later in life. 400 years has passed since the first African slaves were brought to what would become the United States, and I thought about the horrific and tragic Middle Passage, an unchosen life and often death at sea, and then about the kind of courage it would take for descendants of those folks to choose a life of service at sea. This piece is in wonderment and awe of the first African American women to serve in the U.S. navy. "Within the Veil" is a lyric from a later verse of "Amazing Grace," which I take to refer to the space between life and death, a moment when a soul reflects on what it is they did on earth before moving on to whatever's next. 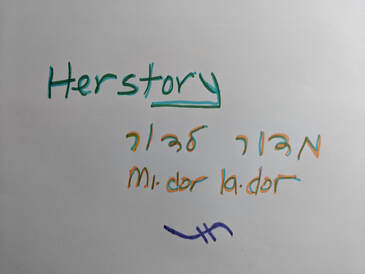 Link 7: Herstory, ​submitted by Lesley Litman
​Artist Reflection: When I saw the previous piece it made me think of how women have "stepped into the water" throughout history and I wanted to honor that by highlighting "herstory." Midor Lador means from generation to generation in Hebrew. I am continually inspired by stories sharing the strength of women to rise up in challenging situations, connecting people, places and generations.

Feeling inspired? Create your own artistic response to this chain and share on instagram #translations2020.
​
Want to get involved submitting a word or responding with art? Click here to participate in Translations: chains of positive energy (c.o.p.e.) and we look forward to sharing your work...